Peter Garson 01557 814584
This email address is being protected from spambots. You need JavaScript enabled to view it.

Gatehouse Squirrel Group: help us to save our reds

If you are interested in actively helping the native red squirrel population around Gatehouse of Fleet to survive and prosper, there are several opportunities available through this Group:

The Gatehouse group was founded in early 2015, in response to local interest and a perceived increase in grey sightings. Some greys carrying the squirrelpox virus, which is lethal to reds, had previously been detected in Dalbeattie, New Galloway and Newton Stewart. In 2019 there have been the first-ever cases of squirrelpox near Kirkcudbright (June) and 2 miles west of Gatehouse at Skyreburn (July), as well as several earlier outbreaks further east along the Solway Coast. So the threat to our reds is now very real.

We are set up as a project under the Gatehouse Development Initiative which provides us with proxy banking facilities and charitable status. We are affiliated to Saving Scotland’s Red Squirrels (SSRS: scottishsquirrels.org.uk), a national conservation project led by the Scottish Wildlife Trust. And we belong to the Red Squirrel Forum for South Scotland (www.southscotlandsquirrels.org.uk), along with all the other squirrel groups and networks active in Dumfries & Galloway and the Borders . We receive public donations from visitors to Cream o’Galloway at Rainton Farm and are a ‘Proud Supporter’ of the Galloway & South Ayrshire Biosphere. Over 60 people are now on our email list, forming a network that extends from the Carrick Shore to Creetown on the coast, and inland towards Laurieston and Ringford. We are always keen to attract more people to the cause, especially in rural spots. Our whole network is active in reporting sightings of both reds and greys via scottishsquirrels.org.uk.

To get more a more detailed picture in particular woods, we have used feeding hoppers equipped with sticky pads under their flip-up lids to collect hairs from visiting squirrels. Red and grey squirrel hairs (and those of pine martens) can be distinguished under a microscope. In 2015 ten of us did this to confirm the presence of reds in virtually all areas of deciduous woodland around Fleet Bay and up the Fleet Valley. Using the same technique, some of us also cover sample plots included in the annual spring survey coordinated by SSRS, which is designed to keep track of distribution trends for reds and greys across the whole of central and south Scotland. Results for 2013-18 indicate that in South Scotland the reds are just about holding their own, whilst action being taken against greys is having a significant overall effect.

A monthly census of reds feeding in more than 20 people’s gardens in and around Gatehouse has been running since January 2017. This involves recording the maximum number of reds seen at once in each month, as well as the number that are individually recognisable. Both these measures peak in spring and summer, when breeding is in progress but (enigmatically) natural food may be in short supply. This suggests that providing food for reds in spring and summer is likely to improve their breeding performance and the survival of their young. We are always looking for more people to join this scheme, which will encourage you to take a much closer look at your regular squirrel visitors.

Extensive hopper/camera trap (trailcam) deployments at Carstramon (2016), Skyreburn/Cardoness (2017) and Killiegowan (2018) have used individual recognition to estimate red squirrel density (around 1 per 10ha in these broadleaved woodlands) and revealed occasional greys. These surveys are quite labour-intensive to set up and maintain, so we could sometimes do with more help.

Annually 30-60 grey sightings are reported to us, and we promptly attempt to remove them either by trapping or shooting, with the landowner’s permission. Using trailcams with traps or hoppers has proved to be useful in monitoring grey activity during such control operations. We currently have three BASC/SACS accredited dispatchers for greys in traps, and others licenced and insured to shoot greys in the open. Greys visiting hoppers or bird feeders in gardens are of great concern because they may be carrying squirrelpox virus on their skin and in their saliva (but not affecting them at all). We therefore recommend regular misting of feeders with Virkon-STM disinfectant in an effort to reduce disease transmission.

Raising public awareness remains an important task for us. Many people do not fully appreciate the value of our native flora and fauna, or the threat posed to them by introduced species such as the grey squirrel. We run stalls at summer galas and agricultural shows to spread the word and can always do with more help at these events. We also give illustrated talks to various audiences whenever invited. Going forward we would like to place a focus on developing activities for the young.

Just running the group takes time, so any assistance with this would also be appreciated. Please get in touch if you would like to help us with any of our activities, thereby helping to saving our reds for all to enjoy seeing in future. 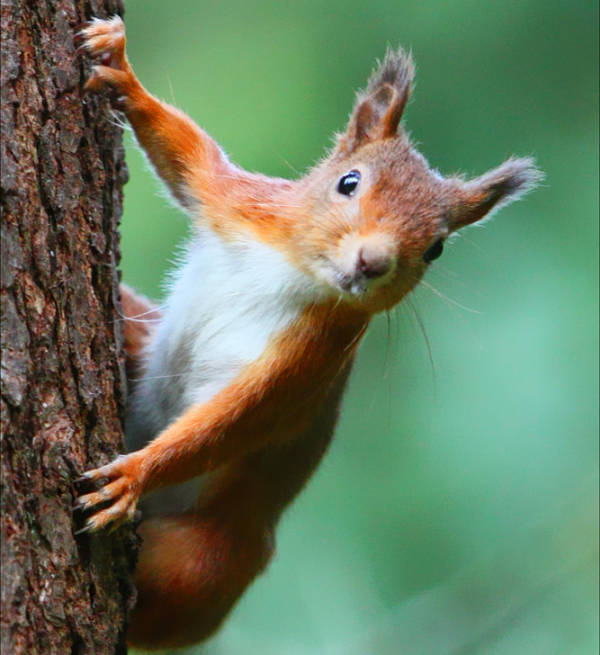