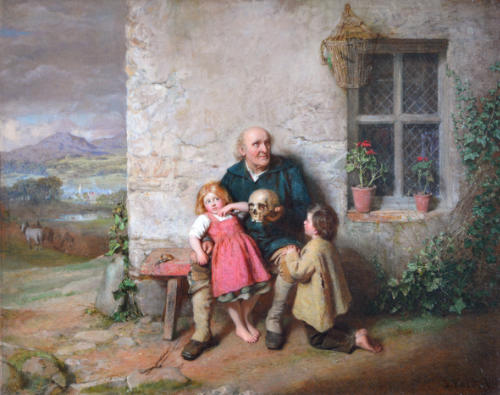 The Battle of Blenheim by John Faed

Gatehouse of Fleet is the home of the Faeds, a remarkable family of Scottish artists. Of the six children of James and Mary McGeoch born at Barlay Mill, Gatehouse between 1819 and 1829, no fewer than five would have their work exhibited at the Royal Academy in London and the Royal Scottish Academy in Edinburgh. The remaining son William would become a successful farmer in Australia.

John, the eldest of James and Mary's children was born in 1819 and showed early artistic promise, beginning to paint miniatures of the local dignitaries at the age of nine. In 1840 John left his native town to develop his career in Edinburgh and had his first work accepted by the RSA in 1841. He would continue to exhibit at the Academy till 1895, becoming an Associate Member of the RSA in 1847 and a full Member in 1851.

John's brother Thomas also showed an early interest in art but was apprenticed to a draper in Castle Douglas. However, soon after his father's death in 1842 John persuaded Thomas to join him in Edinburgh, where he helped finance his studies at the Trustees Academy. Thomas first exhibited at the RSA in 1844.

Before long John and Thomas were joined in the capital by their brothers James and George who took up careers as engravers. At the time of the 1851 census we find the whole family in Edinburgh with sister Susan, herself a talented artist keeping house for Thomas and William and mother Mary with James and George.

That year, however George died and Tom moved to London becoming an Associate of the Royal Academy in 1861 and a full Member in 1864 and William left for Australia. Thomas remained in London where he pursued a highly successful career, his scenes of Scottish domestic life being particularly popular. A number of pictures recalling the emigration of members of the McGeoch family to Canada such as Sunday in the Backwoods became popular as engravings on both sides of the Atlantic. His Last of the Clan which can be seen in the Kelvingrove Art Gallery has come to symbolise Highland emigration.

John stayed on in Edinburgh, painting scenes from Scottish history and drawing inspiration from the writings of Scott, Burns and Shakespeare. In 1864 he too moved to London but Gatehouse people and places continued to fill his canvases. The call of his native Galloway was such that in 1867 he bought a plot of land on the outskirts of the town and, after spending summers in Gatehouse for several years, settled here permanently in 1880.

James Faed became a successful engraver, executing over 140 plates for many of the leading artists of the day including Sir Daniel Macnee, Sir Francis Grant and Sir Joseph Noel Paton but like his brothers he never lost his love for Galloway.
In 1885 John painted a large picture of Gatehouse to be hung in the newly built Town Hall. The picture was unveiled by his sister Susan and his wife Jane. His brothers Thomas and James were also there for this important occasion in the life of the town.

The Faeds showed that it was possible for young people from Galloway to follow an artistic career. There is no doubt that their example was an influence on the family of E A Hornel. John became closely involved with the young Kirkcudbright artists, encouraging them in their work in the face of their critics. John Faed also gave his support to those who set up the Kirkcudbright Fine Art Association, not only by acting as President of the Association but by encouraging other members of the family to show their best work at the Association's exhibitions. John also illustrated the work of local authors such as George Sproat and George McKeand and the Faeds also contributed illustrations to Harper's Rambles in Galloway.

Thomas Faed died in 1900 and his brother John in 1902. Their sister Susan lived on in Gatehouse till her death in 1909 and James died in Edinburgh in 1911. However, James Faed had a large family and a number of his children followed successful artistic careers, particularly James Faed Junior, who is best remembered for his Galloway landscapes.

See also: Artists Footsteps - a website featuring the work of Dumfries and Galloway artists of the past.