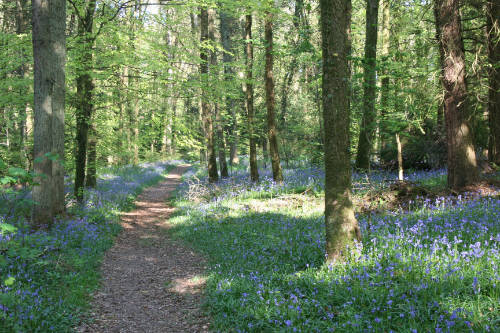 Immediately behind the town are the Cally Woods. The woods are renowned for the fine broadleaved trees. Species include oak, birch, sycamore and beech. Although the trees are relatively young, there is an abundance of animal and plant life which has found its home here. The woods are part of the annual snowdrop festival on account of the splendid displays, and in spring and summer there is a wealth of wildflowers such as primroses and bluebells. Roe deer and red squirrels can be spotted as well as a variety of birds, including buzzards and treecreepers.

If arriving by car, turn onto the Cally drive between the impressive gate lodges of Cally House as you approach Gatehouse from the east.  There is a parking area (free) about 100 meters along on the left hand side.  Forestry information panels provide further information on walks and seasonal interest.  There are many waymarked paths through the woods, and many features of interest.

The woods were once the grounds and open parkland of Cally House, now the Cally Palace Hotel, and the remains of old field dykes can be seen winding their way between the trees.  A section has been restored as part of a project to restore the walls of the estate.  As well as the boundary walls which can be seen as you enter Gatehouse from the east, the project has also restored some of the more specialised walls such as the haha and sunken dyke, built to contain cattle, but without spoiling the view from the house windows.  The remains of Cally Motte can be visited, and there is also the Temple, an 18th century folly.  For a longer walk or for cyclists follow the Cally drive past the hotel and on through the woods, following the ensuing track all the way to Sandgreen beach. Check our Walks section for detailed directions.