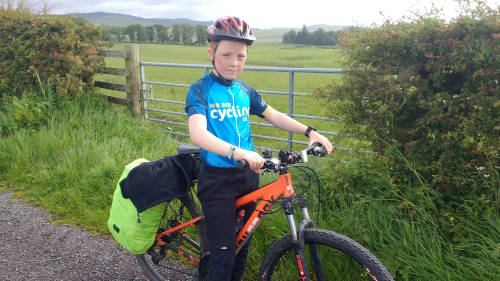 Robin Alderslowe went to London last month to receive his Cycling UK Outstanding Young Achiever award from Jenny Graham, the Scottish round-the-world cycling record-holder.  He received his award for encouraging people in our community to get on their bikes.

From his toddler days of riding a bike, Robin is an enthusiastic cyclist and environmental activist who loves experiencing nature with his many bicycle adventures. Robin completes the daily 20-mile round trip to school from Gatehouse of Fleet to Kirkcudbright Academy on his mountain bike. Apart from days of frost or transporting his bagpipes to school, Robin comments on how his concentration and energy is so much better following a bike ride, rather than sitting on the school bus. He always has a story to share of stopping to hear the skylarks, the overflying red kites or the stunning views of the Galloway hills and coastline.

Robin's parents are very proud when they hear regularly from people in the community how inspiring it is to see this young man 'do the school run on his bike'. Many comment on how he always waves at passing traffic and many of the farm workers comment on how Robin will pull in to allow the tractors to pass or likewise they will do the same for him.

He went on his first cycling/camping adventure when he was six, and from there he has cycled the Great Glen (Inverness to Fort William), the National Cycle Network number 4 in south Wales, and number 7 Galloway to Glasgow amongst many others.

Along with bike rides at the Drop-In and helping out at the Wheels of Fleet bike project. Robin continues to encourage so many around him to get on their bikes to help with general fitness and, of course, enjoying the wonderful natural environment.