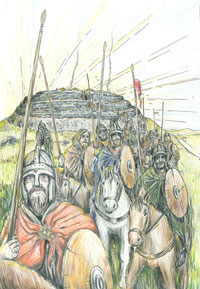 Its people were Britons, who spoke a form of ancient Welsh. Much of the earliest literature of Scotland is the poetry of Taliesin, its bard, praising the valour of his king, Urien of Rheged and his son Owain - poetry that may have once been heard at the royal stronghold of Trusty’s Hill itself. Gathering warriors from other hillforts in south-west Scotland inhabited at this time, such as Tynron Doon, Urien and his warband led raids against the neighbouring kingdoms of their fellow Britons and the newcomers to the east, the Angles of Bernicia.

The cultural vitality of Rheged also survives in the earliest Christian monument in Scotland, the Latinus Stone, erected in Whithorn to Latinus and his daughter around 450 AD. For it is at Whithorn around this time that Ninian, Scotland’s first bishop, established his church of Candida Casa (Shining White House) and from which literacy as well as the Christian faith spread across southern Scotland. Nor was Whithorn the only early Christian church set up in Galloway at this time. Further west, at Kirkmadrine in the Rhinns, survives another of the oldest Christian inscriptions of Scotland and another early Christian monastery on Ardwall Island may have had some relationship to nearby Trusty’s Hill. This hierarchical network of early Christian communities were literate, and valued Roman culture at a time when it was fading from western Europe.

It is perhaps through the extensive contacts that Whithorn had with continental Europe that the Christian kings of Rheged also acquired wine and spices from the eastern Roman Empire, foods and dyes from western France and decorated glass from the Rhineland, recovered from Mote of Mark, another fortified hilltop on the Galloway coast. Excavations at the Mote of Mark revealed this to be the fortified workshop of a mastersmith, who produced exquisite jewellery and decorated horse-gear from a range of rare materials, for the kings and nobles of Rheged.

By the late sixth century AD, Urien of Rheged was the dominant king of the north. He led an alliance of four kings against the Angles of Bernicia, but was assassinated by Morcant, one of these northern British kings, before victory could be sealed.

The violent fiery destruction of Trusty’s Hill and the other hillforts of Mote of Mark and Tynron Doon may reflect the fall of Rheged, when during the seventh century AD much of southern Scotland became part of the Anglian kingdom of Northumbria, and Rheged faded from memory.